While the world spins out of control and there seems no escape, allow Luniakk Publications and Toneye Eyenot to provide you with one. For less than a dollar a trip, you can be dragged screaming from your comfortable little world into one so infinitely darker, the nightmare of this reality will pale in comparison.

From the shocking and extreme to the creepy and unnerving, Eyenot delivers the horror in spades. With more triggers than the entire U.S. military arsenal, be sure to tread carefully as you navigate these nightmare realms created for your morbid entertainment. Psychopaths, cannibals, demonic anomalies, monsters – human, beast and spirit await you.

What are you afraid of? Let us help you realise your deepest fears.

WARNING: You may never find your way back to the light.

*All titles available on Kindle Unlimited, and for the ‘traditionalist’ among you, all but Flash of Darkness can also be read on bloody slices of tattooed dead tree flesh.

“Have you ever taken pause in your busy – your mundane lives, to contemplate your impending Deathday? Imagined, perhaps, that you knew the precise day-hour-moment that your life will expire into Death’s embrace? How would our lives be if we knew when we were to die?”

…and so begins this dark journey towards the inevitable. Follow Dylan Bantram, one who has this terrible foresight, as he desperately attempts to thwart the designs of Death by ‘going out on his own volition’. Will Dylan be successful? Will he effectively spit in the face of Death and end his own life before the appointed time? Or, will Death have its way with him? Only one way to find out… 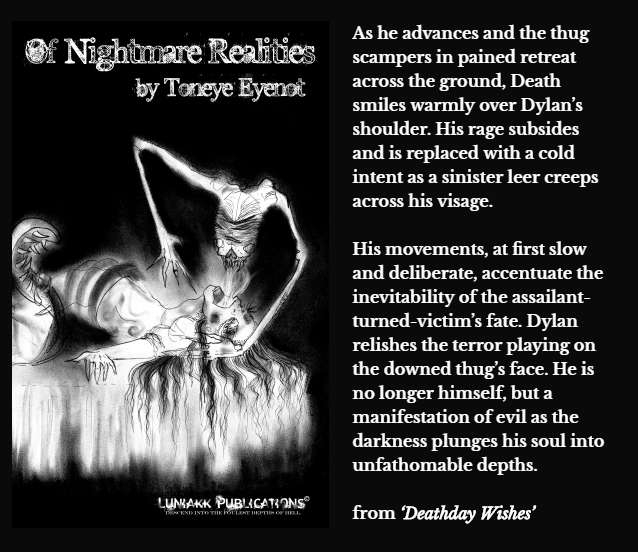 Deathday Wishes is brought to life (pardon the pun) through the creepy recital of YouTube horror narrator, Azazel Codex.

If you like what you hear, and would like to read this and other nightmarish stories, Of Nightmare Realities is available from Amazon, in Kindle, KU, and bloody slabs of tattooed dead tree flesh here: mybook.to/OfNightmares

“Of Nightmare Realities” by author Toneye Eyenot is a short story anthology that will chill you to the bone. I’m usually wary of short story anthologies, as they can become extremely self-indulgent and repetitive. “Of Nightmare Realities” is in a completely different league than the rest. Injected with a heavy dose of fatalism and amor fati, the anthology reads like a Kafkian masterpiece. I’m unsure whether the author has had any interaction with Franz Kafka’s work, but this anthology reads exactly like Kafka. Even the tone and its “Turkish fatalism” are like Kafka and Nietzsche.

I am also extremely impressed by the author’s exquisite writing technique. He never misses a beat, nor does he wallow in a dark pit of misnomers and terrible self-indulgence. He writes with force and attitude, never backing down from creating intense and powerful set pieces. The reader is swept away by the Black Mirror/Outer Limits motifs, and reading “Of Nightmare Realities” is akin to doing brain surgery on David Lynch – it’s weird, remarkable, macabre and violent.

The very first story, “Deathday Wishes”, is about a man who knows when he’s going to die. For the author to take such a primal fear and create a world around it speaks volumes about this superlative anthology. I was left breathless during the last few lines. Although our reviews are predominantly academically oriented, I can’t help but write how I felt when I finished the first short story. You know that disturbed feeling you get after watching an insane horror film? Like The Shining or The Exorcist? Well, that’s what I felt inside of me – an embryonic, whispering fear coupled with the sudden realisation of my own mortality.

The anthology is mostly about death, dying and predeterminism. Nothing about this is happy, nor will you feel any sense of happiness after reading it. That wistful contentedness, that inherently human need for experiencing “peace”, will be ripped away from you and you’ll be left in the dark, clamouring and screaming to get out. Most horror authors fail to take the essence of horror – fatalism and nihilism – and combine it with a very real form of amor fati. Ghosts and ghouls don’t do it for me, nor do demons and the rest of the horror lucky packet. “Of Nightmare Realities” did it for me. In fact, it terrified me on such a deep, subconscious level that I actually had nightmares about the stories.

“Of Nightmare Realities” contains the author’s version of the human condition. It’s not a pleasant version, but for a horror anthology I cannot fault it. The only criticism I have is the author’s verbosity. There are way too many adjectives used to describe certain set pieces, plus the author uses somewhat obtuse and obscure words in his descriptions. It’s usually better to dumb down the verbiage and make it simpler for the reader, otherwise it comes across as self-indulgent and reads like a vanity project.

These are small technicalities which I’m sure the author will correct in his future works. I want him to stay in the Kafka arena. This is where he shines. The stories which were not Kafka-esque, lacked the terrific veracity which made the anthology so great in the first place.

“Of Nightmare Realities” is visceral and nightmarish. It’s also one of the best short story horror anthologies I’ve ever read.

Here’s a selection of excerpts from all the available Luniakk titles by Toneye Eyenot. Perhaps one or more may tickle your Horror-bone enough to dig deeper into the disturbing worlds this author traverses in the darkness of his mind(s). Tread carefully, as we have warned before…you may never find your way back to the light 😈

Available in Kindle for only 99c, or free to read with Kindle Unlimited 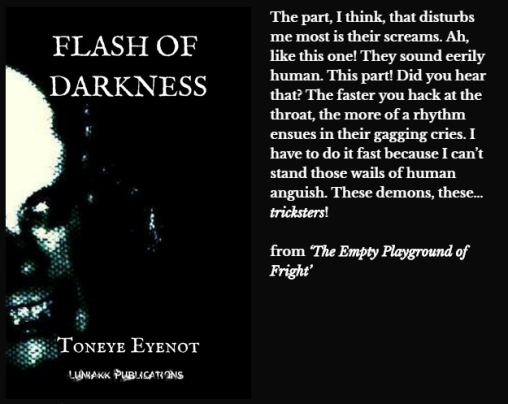 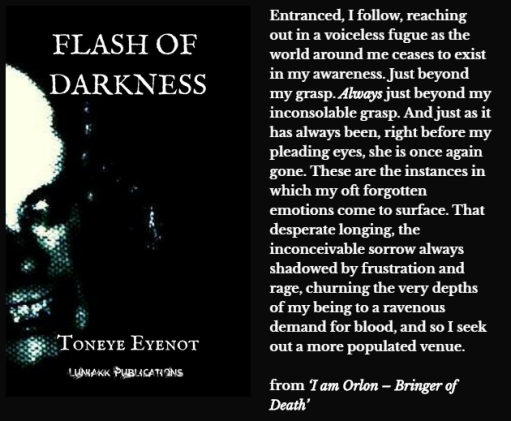 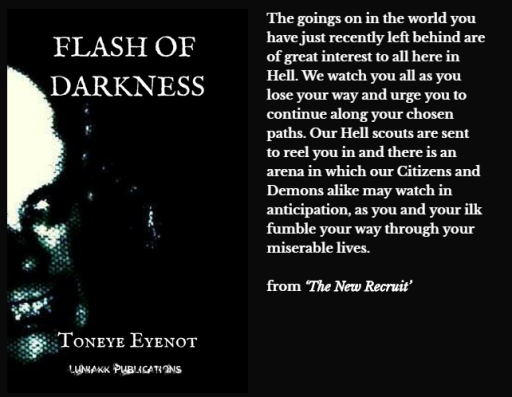 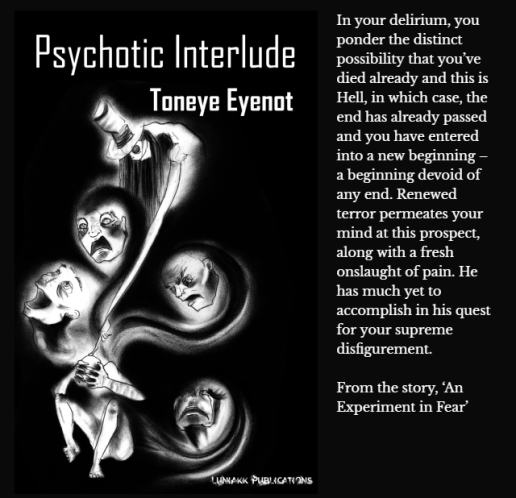 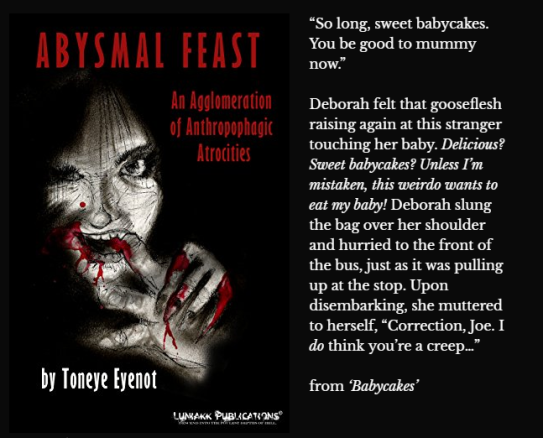 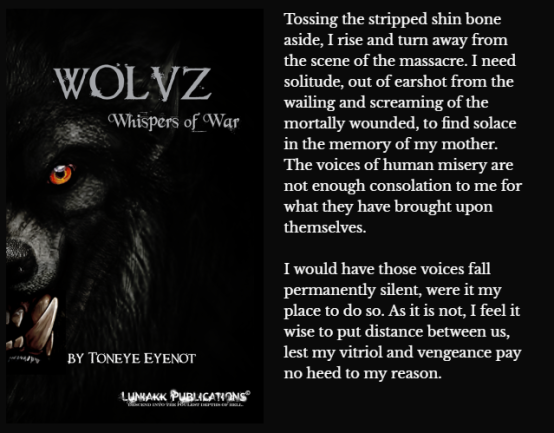 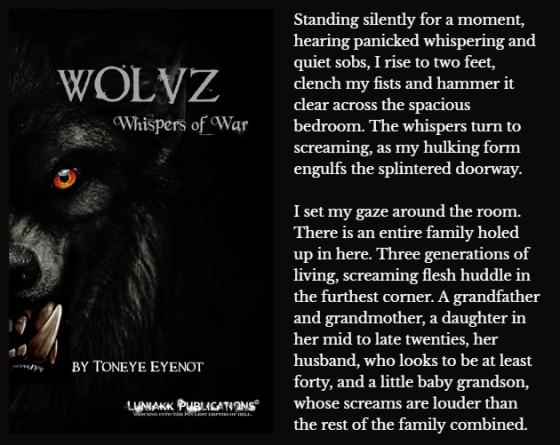 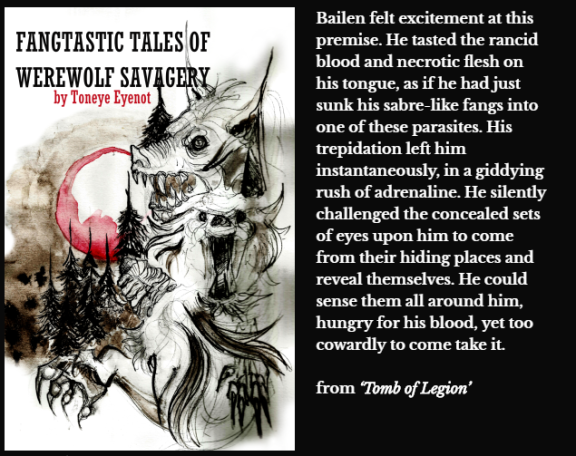 All the above titles are also available on Kindle Unlimited…

Flash of Darkness gets some love over at Bibliophilia Templum!

A Gripping Collection of Tales

Flash Fiction Collection
“Lurk within my mind(s) and see
The terrors which await thee…
Just keep in mind, once in my mind
You cannot flee…” ~Eyenot

Five flashes of terror to torment your mind…
Allow Eyenot to drag you through the darkness.
You may never find your way back to the light.

Flash of Darkness by Toneye Eyenot is, as the title suggests, a collection of dark flash fiction. In my opinion, this is an outstanding collection.  I dare say darkly beautiful.

Except the last one.

The stories herein flow poetically with rich prose of gripping terrors, graphic horrors, and psychological torments. They grab your mind and tug at your emotions. They are deep and… 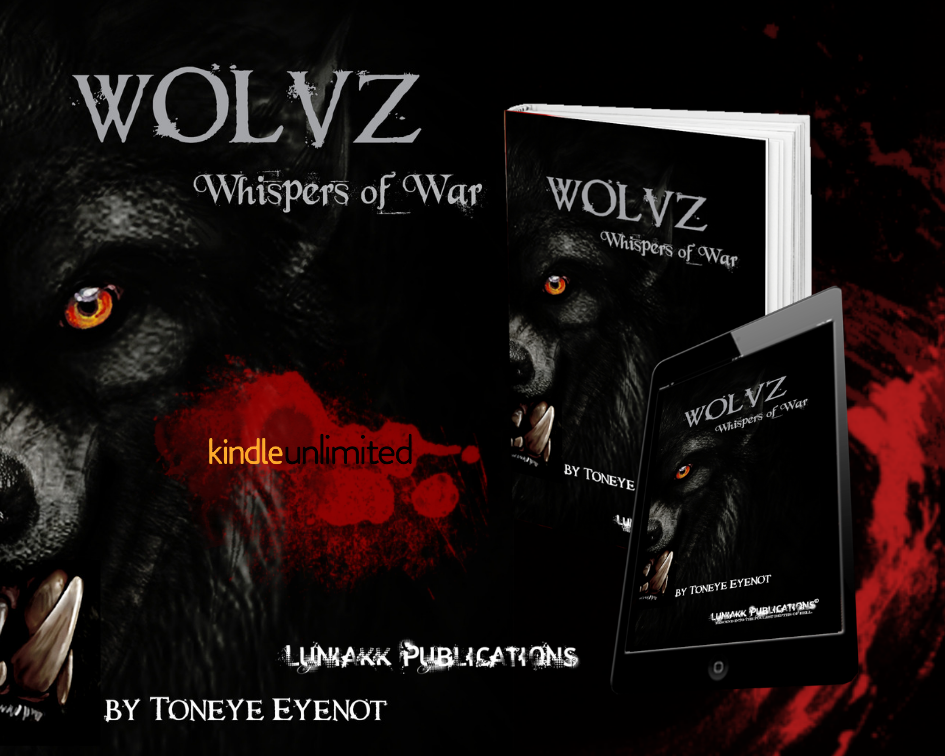